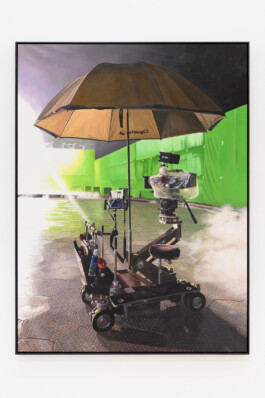 Fragile is pleased to present More Atmosphere! an exhibition of new works by Britta Thie.

More Atmosphere! marks a return to Thie’s artistic origins as a painter. The exhibition takes its title from a phrase often used by film and television directors, who, seeking to create more evocative shots, call for ‘more atmosphere!’ - a demand usually met with the production of fog or smoke by technicians on the set. ‘Real’ conditions, thus, are conjured by artistic intervention. The means of atmospheric production are centre-stage in Thie’s new collection of works.  While filming a television series in Budapest, Thie began to consider the objects that surrounded her while she waited for her scenes. Such objects provide the crucial - and crucially invisible - infrastructure of moving image production and popular entertainment. This paradox, ‘present absence’, became a fulcrum for larger questions the artist seeks to pose about the invisibilisation of forms of labour, the often deceptive power of narrative, and the ways in which minds and objects interact.

Over the course of the series’ shoot, Thie came to think of the objects as companions of a kind, familiar presences with whom she began to feel a sense of kinship. To Thie, they were not human, exactly, but they had their own personalities. The works in More Atmosphere! serve as a kind of portrait gallery of these inanimate ‘characters’. The experience of time is also central to understanding the works. Using the ‘old’, ‘slow’ medium of painting, Thie depicts the hidden ecology behind the rapid flow of streamed and digital images that define contemporary media. Thie’s photo-realistic images gesture toward the high-resolution visuals expected of contemporary television and cinema, wherein HD imagery is deployed to connote ‘reality’, all the while shaping the visual culture beyond the screen.

The works in More Atmosphere! are not simply still-lifes. They provide a specific perspective on the ways objects become players in a story. One may think of the literary device known as ‘Chekov’s Gun’ - shorthand for a quote from the Russian playwright in which he stated that if one shows a gun in the first act of a play, that gun must go off by the end of the play. Chekov’s Gun is inanimate, but, by its nature, it is not innocent. Britta Thie’s lighting rigs, trolleys, and cameras are not the same kind of devices that Chekov’s Gun is understood to be. They exist just beyond the story’s frame, but like Chekov’s Gun, their presence is irreducible to the production of narrative, and to the endless flow of images - and the narratives they create - that now dominates popular media consumption. In a wry upending of hierarchies, Thie offers a pointed reminder that without the spotlight itself (and the person who operates it), no actor could dream of their moment in the limelight.

The event takes place in compliance with the current hygiene and protective regulations, with the required distance as well as wearing an FFP2 mask. The entrance is only possible for visitors who are tested, vaccinated, or recovered.